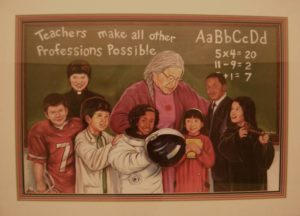 Most of us are frustrated with the current system of education, either as parents, students, educators or employers who need staff but are not always happy with the mindset of those applying, entitlement being one such issue.  A fresh multi-faceted education model is possible where different perspectives are taught, where teachers can lead by example by offering different points of view leading to transformation to a just society where all prosper rather than the current conform or be silenced model we have currently.

I believe we all have the best interests of the next generation at heart however our points of view have never been more opposed in how to get there.  For example, right versus left, bipartisan politics which in Australia is Liberal (more conservative and capitalist) versus Labour (more socialist in nature).  Wouldn’t it be wonderful to have the best of both worlds?  Perhaps we can …

Imagine an education system which is more diverse where various paradigms are taught such as those coming from the Age of Reason and Science, as well as religion – specifically the universe story as taught by the Jewish, Islamic and Christian traditions, the wisdom of the ancients, indigenous peoples and women.  Wouldn’t this in itself help us to understand one another and go a long way to reduce the various ‘…isms’ that have separated us for eons?

For me it must come back to the purpose of education.  To be able to overcome issues, to go higher to the next level of thinking to overcome the current level of thinking that led to the situation that created the issue…. Or not?  Perhaps it is a returning to fundamental truths of what is right and wrong.  Many years ago, I was teaching a group of young adults and challenged them to come up with ‘10 things I hate’ in small groups.  I mixed the groups from the diverse class of students from various places in Asia, Europe and South America, various religions Shinto, Catholic, Muslim, Buddhist, and atheist.  What transpired deeply impacted me for life.  The final list looked like the 10 Commandments or list of behaviours of do’s and don’ts that can be found in the Bible, Torah and Quran, where the first five books are similar.  Additionally, I often look back to go forward.  For example, did you know that the basics of financial education was taught at schools 100 years ago?

I can see the attraction of the various alternative education models that work on assignments or the application of knowledge.  I believe in 2020 and beyond the way forward is to be solution focused.  Imagine the vision of the desired future, create a practical plan to get there, commit to it, partner with others to move toward it.  Yes, you may recognise this is the basic 4 step imagineering strategy – Imagine; Solution; Commit; Partner.  The vision must be positive such as no war becomes peace.  With the solution it must start with what can we do as individual’s this week or this month to begin the journey to a better world.  For a video explanation go here.

Mostly it requires educators and parents to lead by example.  For us to be authentic and vulnerable about where we are and realise that we are all interdependent.  For example, as a teacher I cannot do my job effectively unless the students do their job effectively or as a doctor it also depends on my patients following the advice I give them to do their practical part to overcome the health issue.  In other words taking responsibility for ourselves for our own part in changing the world which must start with changing our individual worlds.

A different perspective can be gained through the gift of travel and especially living as a minority which cannot be underestimated.  We can only come to view ourselves in relation to another.  For example, when we live as part of a minority, we can see that we do things differently and we begin to question why we do things the way we do.  A current very real challenge is the fact that social media gives us more of what we already want and believe.  So, if we search up something the particular company eg google, youtube, FB will recommend more of the same, thus confirming our point of view.  When major media companies are owned by the same group/s or similar ones with similar politics, we can think that everyone thinks the same as us.  Thus, the phenomenon that it seems most of the world, especially the average American was so shocked that Donald Trump won the Presidential election in 2016.   Why should this matter to us?

The Australian curriculum requires that teachers and students show alternative points of view.  So, if you cannot recognise the bias by viewing two opposing sources, you come to think that is just the way things are.  Then people conform to the current politically correct perspective or agenda driven thought of the day.  Climate change is one example with so many books stating this theory as fact.  From this same perspective everyone else is a climate change denier and does not care about the environment.  This is not true and is more like saying one plus two equals sixty five.  Most people I know who do not agree with the alarmist theory as set out by Al Gore’s famous documentary ‘An Inconvenient Truth’ have done their own research and seen the other point of view where we all have a responsibility to care for or steward the environment, rather than blaming government or corporates.  When I am teaching this topic, I show the movie ‘The Great Global Warming Swindle’ as well to encourage students to do their own research and make up their own minds.    It is wonderful to see real debate on issues… like we used to have!

An education system where different perspectives are taught and modelled by the adults in our lives, which is solution focused, and requires us each to take responsibility to overcome issues.  Wow, I want to be part of that system!

To learn more about a futurist’s solution to…