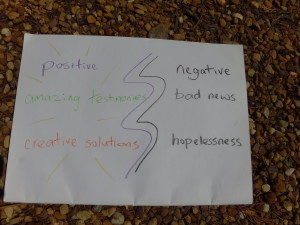 In these days of so much political, social and economic upheaval, we have a choice – what will you choose to focus on?

Where do our thoughts come from?  Our mindsets are developed and watered over time.  This is a topic that has fascinated me my whole life.  Every time I was around people, particularly of different generations, or the same generation but with very different thinking to me, I would ask their opinion about certain topics and more importantly to me why they thought things had changed.  One example was the decline in respect of elders and authority figures (which creates chaos in the classroom and society).  Did you know that generations ago, children learned many things in class without their teacher being required to engage in constant behaviour management?

I am a Gen X and when I was little life in general was very sheltered.  My thoughts were influenced mainly by my parents (and friends and family), my school, and other groups we were involved with in during the early stages of life, plus books.  My parents and reading books set my values for later in life.  My books were a mix of Disney, classic fables, and my favourite, The Bible for Children, where I learned about Jesus, David and Goliath.  I cannot recall television having any real impact until I was in my early teens.  Partly as we didn’t watch it much.  It was on for an hour a day – that we as a family had agreed to watch together.  As I am writing, I do now also recall watching Playschool!

Some psychologists believe that many of our beliefs are generally formed by the age of seven.  This most likely refers to the ‘law of first mention’, which is a spiritual law.  Spiritual laws are above natural laws.  Whenever we hear about a topic for the first time that becomes an unconscious base belief.  When we learn, we scaffold or build bridges to existing learning to help us make sense of this new information.  If we receive conflicting data, we become confused and unsure without really knowing why.  This is one reason why many parents disagree with sex education being taught at earlier grades at school and explains the massive impact of the internet and television especially to guard against those individuals and even groups who would prey upon children.

Today’s most prevalent areas that affect our thinking, and thus our mindsets, for the general population may be categorised into seven mind moulding influences (also called 7 Mountains, popularised by Lance Wallnau).  These seven are: arts and entertainment: business and the economy (for this is where the money comes from to fund everything else): church and other religions; media especially social media; education; family; and government.

I believe that the battle that seems to be on between parents and educators is about this even if people cannot verbalise it.  When two authority figures give conflicting information it stresses the child or youth.  I personally don’t get caught up in the current terminology, especially having been in and around the education mountain for decades in various roles so am able to see the cycles and understand the swings between this theory and that theory.  To explain this take doing maths homework for example, if a parent or other authority figure says something different to the teacher, the child or youth feels powerless thinking something like ‘if these two can’t agree, what hope do I have?’  One thing is certain we all believe we are doing the best for the child.  So, I surmise it comes down to two things.  One, for us to be more flexible with terminology and even the method so long as the goal is still achieved and two, to define the standard.

Many years ago, we in Australia had a standard of right and wrong.  One example is that it was clearly understood that words bring life or death so we were taught to be kind.  One of my favourite audio books with a matching illustrated story book was Bambi.  Bambi’s mum said “if you haven’t got anything nice to say, don’t say anything at all.”  That has always stayed with me.  Later I challenged myself to always find something nice to say.  There is good in everyone, even the biggest bullies.  We do not however have to engage with them.  We might choose to speak a blessing over them from afar!

You can choose to change your mind.  You CAN learn that emotions are attached to your thoughts.  You CAN renew your mind and make new neural pathways for healthy brain function and a better life.  Some practical steps to overcome your past limitations to set yourself up for a successful future will be covered in a future post.